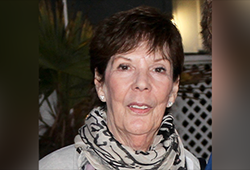 In 1986 my former husband and I moved to Santa Barbara where I met Tom Fly who invited me to a Hospice of Santa Barbara "get acquainted" luncheon. It was really an eye-opening experience for me having just lost my father and mother nine months apart. My father-in-law died the day before my father, and a month later my uncle died followed by a cousin. I was too familiar with death. During my initial meeting with the fabulous HSB Executive Director Charlie Zimmer, I was asked about my family to which I responded with the list of losses in just one year, plus the loss of my brother who died when he was 40 years old in 1963. I think Charlie thought I was there to sign up as a client.

Two years later I was asked to join the Hospice of Santa Barbara Board of Directors and was honored to be a member for ten years. My time on the board included serving on the Executive Committee and as Board President from 1995-1997. HSB was the first board I served on and it will always be my number one.