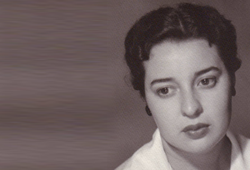 Esther Lavin Berger, a longtime Santa Barbara resident, recently bequeathed an amazing gift to Hospice of Santa Barbara. Esther passed away in July, 2011, leaving an estate bequest to HSB, which included an eclectic collection of precious and semi-precious jewelry.

Esther and her husband John Conrad Berger were married in Los Angeles in 1945. In 1968 they moved to Santa Barbara. With her BA from Hunter College, Esther worked at UCSB in the Chancellor's Office as an administrative assistant until she retired in 1980.

John was in the business of selling picture frames, molding and quality art reproductions to hotels and institutions. Esther assisted him and often traveled with him. Together they enjoyed a modest life and were a happily married couple for 46 years until John's death in 1991.

Esther was devastated by John's death. She had been an only child and did not have any children of her own. Esther was a strong supporter of hospice services and Hospice of Santa Barbara due to her experiencing the loss of her beloved husband. After the loss of her husband, she put her time and energy giving back to the community in meaningful ways.

The heartwarming gift of generosity from an unassuming woman will ensure that Hospice of Santa Barbara will continue to offer its many free services to the community for years to come.