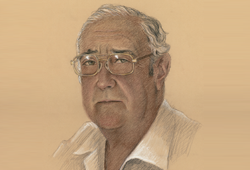 Leigh Block was a wealthy industrialist and art collector. He moved to the Santa Barbara area from Chicago and built a house in Montecito. The house was designed to house his art. And it was world class art. As one of our Board members said, "there were original Picassos in the bathroom." But as we all know, material wealth and great culture do not provide a barrier against mortality. Leigh's wife became ill and died. Then Leigh's daughter became ill and died. Leigh was able to provide the best care possible for them – including having a physician reside at the home.

After his daughter's death, Leigh decided that, after he died, his house would be sold and the proceeds given to help build the endowment for the Hospice of Santa Barbara Foundation. He told his friends that he had been able to give his loved ones the best care possible, a level of care that was well beyond what most people could afford. By freely giving this gift to Hospice of Santa Barbara, he wanted the kind of care he had given to his wife and daughter to be available to anyone, regardless of their ability to pay.