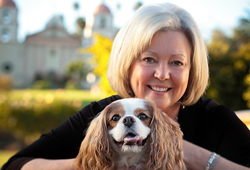 In 1995, when my father was diagnosed with cancer, my siblings and I alternated visits to Santa Barbara to care for him during his chemotherapy weeks. When, in November of that year, the doctor told him there was nothing more they could do, we continued to visit and be there. But, as was inevitable, the day came when he needed professional care for his final days and we were at a loss for what to do. His doctor, unbeknownst to us, contacted Hospice of Santa Barbara and within a day, he had secured a room at what was then the Leigh Block House at Valle Verde.

I had only heard about Hospice of Santa Barbara (HSB) but now I was learning of its depth and breadth of care. It was a godsend to know our dad would be cared for and allowed to die with dignity and in as little pain as possible.

What we didn't know was that an angel by the name of Gail Rink would be there for us, in addition to the extraordinary bedside nursing staff from Visiting Nurse and Hospice Care. Gail, Executive Director of HSB at the time, held my hand through the signing of documents and tears that accompanied many very difficult decisions.

A few years later, I entered the fundraising profession and learned about Planned Giving. I vowed then that I would make sure Hospice of Santa Barbara would receive a portion of my estate when I made my own transition.

Eventually, I moved to Santa Barbara, having fallen in love with the area during my visits with Dad over the years. One day, I opened the Hospice of Santa Barbara newsletter, took out the remit envelope inside and checked the box that said, "Yes, I would like more information on making a planned gift to Hospice of Santa Barbara." At the time I had no idea that it was the first mailing to ever include that option, nor that I would be the first to send in the request.

My planned gift is my way of honoring my father and the important work that Hospice of Santa Barbara does for those preparing to leave this world, and for their loved ones at the most difficult times of their lives, and for our angel, Gail Rink, who made the difficult decisions bearable with her compassionate understanding and guidance.

My family and I will be forever grateful for the compassionate care given our father, and to us; it is my privilege to make a planned gift honoring Hospice of Santa Barbara.