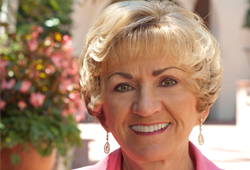 What is Hospice? How could it have helped me as I cared for my husband who was dying of metastatic esophageal cancer? That is a question that I pondered back in 1975 as I struggled to get physicians to provide adequate pain control and allow me to take my husband home (from the hospital) to die.

That experience led me to take a study trip throughout England and Scotland in 1977 to study Hospice. There I met and heard Dr. Cicely Saunders, founder of the Hospice movement. Shortly thereafter, I attended a conference in San Diego during which I heard Dr. Elizabeth Kubler Ross talk about the stages of dying and proclaim her support of Hospice care. Now that I had the personal experience, coupled with Hospice training, I was SOLD on the value of Hospice. And as a registered nurse, I was determined to spread the word about Hospice at every possible opportunity. And, I did!

In 1982, I moved to Santa Barbara and quickly made it my mission to seek out and form a working relationship with Hospice of Santa Barbara. With my newly formed home care company, American Nursing Services, Inc., I knew that I wanted an alliance with an organization that would provide support to patients for whom we were providing personal, end of life care. It was a great fit!

There have been many changes in the health care community since 1982, and many changes with Hospice of Santa Barbara, as well. Little did I realize in 2005, as Hospice had its small and home-like location on Junipero Street, that I would become a client, in need of counseling and support as I faced the impending death of my best and longest friend, Ann, from nursing school days. This experience of loss was very profound, since this was a person who knew me as a "kid" and watched me grow personally and professionally over the 35 years of our friendship. Hospice was my support system during that loss.

Just a year later, I would face the knowledge that my husband and life partner for over 30 years would be diagnosed with Lewy-body disease, a form of dementia. Where did I turn for help and support – Hospice of Santa Barbara. My second husband, Don Underdown, died October 29, 2008 and again, Hospice of Santa Barbara was there for me – long distance in Pennsylvania (e-mail) and then upon my return to Santa Barbara. I pay tribute to Gail Rink who truly was there for me, long-distance, during a most painful time.

The Counselor with whom I have worked these past six years has been the rock that I needed to lean on, the listener that gave good feedback, the professional who was there for me. I have participated in bereavement Support Groups at Hospice of Santa Barbara, as well. This organization has been so good to me. It is time to make the giving "full circle."

When I revised my Trust and estate plans in 2009, it became obvious to me that I wanted to give back – or pay forward – a gift that will keep on giving! Remembering Hospice of Santa Barbara in my Trust and designating a percentage of my estate is the most perfect way that I can think of to say "Thank you, Hospice." Here is a gift that will enable you to continue to provide services to the people of Santa Barbara in years to come. I encourage those who have benefited from the work of Hospice of Santa Barbara to remember this organization as you contemplate the sharing of your resources, be it a gift now, or in the future. Yes, I rather like to think of this as "paying it forward." This is a gift that will keep on giving.